Mayor Bill de Blasio, who took office promising to reform the Police Department and repair relations with black and Latino communities, on Monday unveiled his plan to change the way the police enforce the law on marijuana possession.

Arrests for low-level marijuana possession have had an especially harsh impact on minority communities, and under the change announced on Monday, people found with small amounts of marijuana will typically be given a ticket and cited for a violation instead of being arrested and charged with a crime.

The news, outlined by the mayor and his police commissioner, William J. Bratton, at Police Headquarters, marked the most significant criminal justice policy initiative by Mr. de Blasio since he was sworn in as mayor in January.

While he stressed that he was not advocating the decriminalization of marijuana, Mr. de Blasio said the impact of enforcement on the people arrested and on the Police Department compelled him to rethink how the police handle low-level marijuana arrests. 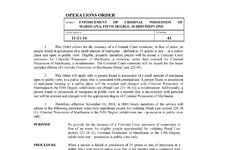 Document | Order for Summons, in Lieu of Arrest, for Possession of MarijuanaThe procedure for the issuance of a criminal court summons for a person found with 25 grams or less of marijuana in a public place and open to public view.

For a Police Department that has devoted enormous resources to tens of thousands of marijuana arrests a year, the shift in strategy should, the mayor said, allow officers to focus on more serious types of crime by freeing up people who would otherwise be occupied by the administrative tasks lashed to minor marijuana arrests.

But the change, detailed in a five-page Police Department “operations order” that is set to go into effect on Nov. 19, immediately raised questions and concerns in many corners of the criminal justice system.

It directs officers who encounter people with 25 grams or less of marijuana, in public view, to issue a noncriminal violation in most instances, rather than arrest them for a misdemeanor.

The mayor said the new policy had the support of the city’s district attorneys. But Brooklyn’s top prosecutor, Kenneth P. Thompson, has voiced some concerns. Since September, his office has been dismissing many marijuana cases, and he said that by routinely issuing summonses, the police would be undercutting the role of prosecutors in assessing arrests and charges. That, Mr. Thompson said, left him “concerned about the due process rights of those who are given marijuana summonses.”

As they headed into a meeting with departmental leaders to hear about the new policy, some police union leaders said the changes seemed to run counter to the “broken windows” strategy of policing, long championed by Mr. Bratton as a way to prevent serious crime by cracking down on low-level offenses.

“I just see it as another step in giving the streets back to the criminals,” said Michael J. Palladino, the head of the city’s Detectives’ Endowment Association, the union representing police detectives. “And we keep inching closer and closer to that.”

Edward Mullins, the head of the city’s Sergeant’s Benevolent Association, said police officers were always looking to make big arrests, to catch “bank robbers” or to seize guns. But sometimes, he said, marijuana arrests can “pop a guy wanted for robbery.”

“People are asking: ‘What is going on? Is this department losing its mind? Has the city lost its mind?’ ” he said.

At the news conference, Mr. Bratton said officers would still have to use discretion. If marijuana was being burned or smoked, an arrest would be made, he said. If offenders had an “active warrant,” or were wanted, or could not produce proper identification, they would be taken to the station house, he said.

Officials said violations would not constitute a criminal record. They said court appearances, within weeks of the violation, could lead to a fine of up to $100 for a first offense.

City officials acknowledged that some elements of the policy shift could be complicated. Summons forms, for instance, do not identify offenders by race, making it potentially difficult for the city to track the effects of the change on groups, like young black and Latino males, who have often been disproportionately stopped in the past.

It is also unclear how officials might best appraise the success of the plan, though relevant statistics are likely to include summons and arrest figures and the number of calls placed to 911 or 311 for marijuana complaints.

Daniel L. Squadron, a Democratic state senator who represents parts of Brooklyn and Lower Manhattan, has introduced a bill in Albany to change the state penal code to decriminalize small amounts of marijuana possession — whether the substance is in public view or not.

“The mayor’s action is a big deal to undo a glaring injustice,” Mr. Squadron said. “But it shows we also need to change state law to create fairness.”

Critics have said the police and prosecutors have been improperly charging people with possession of marijuana in public view, often after officers ask them to empty their pockets during street stops.

In 2011, Raymond W. Kelly, then the police commissioner, issued an order reminding officers to refrain from such arrest practices. Mr. Bratton said such practices were not now in use and the problem had been fixed. By now, the number of marijuana arrests has decreased, roughly mirroring the drastic reduction in the frequency of police stop, question and frisk encounters.